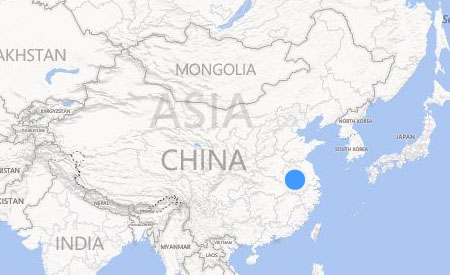 The relationship between Anhui Province and Maryland encourages the exchange and cooperation in a wide range of areas including agriculture, economic development, trade, culture, education, environment, science, and technology.  Anhui State has a population of about 60 million people and is governed by Wang Sanyun.

Both Maryland and Anhui Province have had Committees and Councils come together and discuss various ways they can help one another in education, business, environmental areas or healthcare. The committee meets quarterly and has established two sub-committees that focus on business and education.

The Maryland team, including Mark Xu and Steven Drake, with Director Li at the top of Huangshan Mountain.

On July 2nd, members of the Maryland-Anhui Sister State Committee held a meeting to elect the new committee chairperson.  Steve Drake, the immediate past Vice-Chairman, accepted the committee’s vote to take over as Chairman.

On July 2, the Office of the Secretary of State met with Chinese People’s Association for Friendship with Foreign Countries (CPAFCC). The delegation visited Maryland to learn more about the Maryland Sister States Program. Maryland has maintained close relations with their Sister State, Anhui, a province in China. On February 17, Anhui Friendship Association hosted its Chinese New Year Celebration Party, where a Letter of Appreciation was presented from the Office of the Secretary of State to the Co-Presidents of the AFA. This letter recognizes the important role the AFA has played in successful events, such as the June 2017 visit from Party Secretary Li Jinbin of Anhui Province, as well as the planning of MD-Anhui Promotion Week scheduled for May 2018 in Maryland. Secretary of State John Wobensmith meets with He Jun, the Director of the Talent Work Leading Group Office of Anhui Province, along with Nathaniel Ahrens, Director of China Affairs at the University of Maryland. On April 24, Secretary Wobensmith and Deputy Secretary Borunda met with Anhui Ministry of Foreign Affairs Director General Wang Xin and Delegation followed by a gift exchange. This meeting discussed investment opportunities in both states, as well as Anhui Week that is planned for early fall in Maryland.